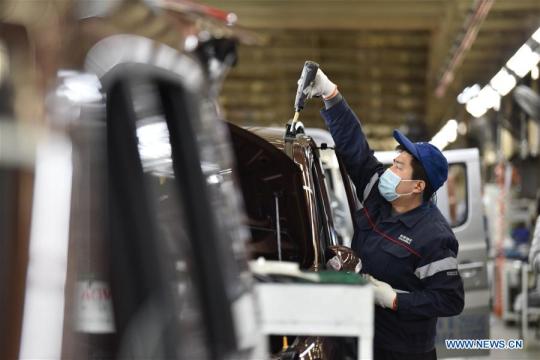 A worker operates at the factory of Chang'an Automobile in Dingzhou, north China's Hebei Province, Feb. 16, 2020. Companies in Dingzhou resumed production with epidemic prevention measures during the outbreak of the novel coronavirus. (Xinhua/Zhu Xudong)

Achieving this year's economic growth-related goals has become as important as containing the spread of the novel coronavirus pneumonia outbreak, and policymakers are rolling out more measures to win the two battles, according to officials and analysts.

The nation's economic growth objectives are usually determined in March at the annual meeting of the National People's Congress, China's legislature. This year, the country plans to achieve the baseline target of doubling 2010 GDP and per capita income by 2020, which requires real GDP growth of no less than 5.5 percent this year, a view that is widely held among the nation's leading economists.

To prevent the economy from falling below the "bottom line", additional monetary and fiscal policies are needed to help offset the fallout of the outbreak, although over-aggressive stimulus should be avoided, they suggested.

As a measure to support enterprises hit by the epidemic, financial watchdogs, including the country's central bank and the banking regulator, said on Saturday they would tolerate a higher ratio of nonperforming loans in commercial banks.

"Maybe the nonperforming loans will increase, and we are prepared for that," Fan Yifei, vice-governor of the People's Bank of China, the central bank, said at a news conference on Saturday. "We are trying to solve that problem."

China has a relatively low level of nonperforming loans, compared with some other countries, so the regulators will have more room to adjust the policies, Fan said.

At the same time, Fan stressed that "a prudent monetary policy" is the precondition that should not be changed as excessive financial stimulus may lead to side effects, such as soaring prices.

China's central bank has been aware of the inflation pressure from supply shortage as a result of halted production and logistics.

The central bank will take measures to keep prices stable and China will never have large-scale inflation, Fan said.

China's consumer price index rose to 5.4 percent in January, the fastest growth pace in more than eight years, as most production and transport had been halted to curb the spread of virus.

Besides inflation, the impact of the epidemic on economic growth will most likely be focused on the consumer sector and investment before a recovery, as some industrial and service indicators remain weak, according to research by Goldman Sachs.

A meeting of the Standing Committee of the Political Bureau of the Communist Party of China Central Committee on Wednesday urged minimizing the impact of the outbreak and ensuring stable social and economic development this year.

The country will increase funding and roll out targeted tax and fee reduction measures to ease the strain on firms, according to a statement issued after the meeting.

Monetary policy tools include liquidity injections through cutting the reserve requirement ratio — the funds that must be held in reserve in financial institutions. They also include medium-term lending facility operations at lower interest rates, tax relief and cutting lending rates for corporations to reduce financing costs, according to economists at Goldman Sachs, Morgan Stanley and Nomura Securities.

The economists expected the central bank to cut the benchmark lending rate from the current level of 4.15 percent. That would reduce financing costs for enterprises.

Special subsidies will also be provided to companies hit by the epidemic, said the Ministry of Finance. As of Friday, financial departments at all levels had allocated 90.15 billion yuan in subsidies to help prevent and control the disease.

Fiscal spending to curb the epidemic may increase to 150 billion yuan, about 0.5 percent of the government's annual expenditure, said Ming Ming, an economist at Citic Securities.

Experts are tracking the spread of the outbreak and its impact on the Chinese economy.

"We are still waiting for the upcoming national consumption, exports and the credit growth data next week, to help to further assess the economic impact," said Zhu Jianfang, chief economist at Citic Securities.

But nationwide easing in the property market is unlikely, and the policy of differentiated real estate policies for different cities is likely to continue. Also, foreign exchange will not be used as a policy instrument to support the economy under current scenarios, said Shan Hui, an economist at Goldman Sachs.